Can you focus when it's a matter of life and death? 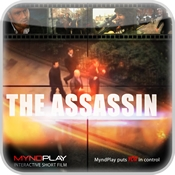 *Requires MyndPlayer v1.3 and above

Catching up with an old army colleague, Sam is quickly faced with a dilemma: Andrew, his friend, begs him to save his life by taking another, in order to clear a debt with an unscrupulous American gangster, Patrick. It's no secret to Andrew that after their military service Sam became an assassin for hire, but eventually his conscience caught up with him, and Sam decided to put his past behind him. But now the stakes have become personal, and you the viewer must help Sam decide whether he should help his friend and take the job, and to deal with the consequences of these actions.

A further danger facing Sam is the issue that if he does the job, he will have to be deadly accurate with his aim, or he will face the retribution of the bodyguards of his intended target. Have you got what it takes to help Sam focus and hit his targets.

The Assassin has 2 interactions, 3 endings and 5 possible alternatives.

*Apps sold at www.myndplay.com are for computers only, mobile versions of the apps can be found in the Apple App Store and Google Play Market