The MyndCap is Shipping
Order Here 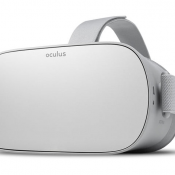 - MyndBand BLE - the world's first research grade customisable EEG Neurofeedback headset which also integrates directly into VR headsets allowing brainwaves to go beyond the lab and the screen into the real and virtual world.

- all software updates before the official release date

- the final software update when the MyndVR for Oculus Go is released.

You will also receive 3 VR apps to test and give your feedback as we are working on those, before their official release, and you will receive the final versions of those too when they are updated.

Get the MyndVR Oculus Go Bundle now at a discounted price, with apps which will not be included in the final release. Be the first one to control VR with your brain. And let us know what you think about it - let's shape the future of mind-controlled virtual reality together!